I say this because it is there that we can find the largest set of companies and startups that will be responsible for building this new world.

After meeting the Web Summit in 2018 I ended up putting it on my list of must-see events to take part.

And I say that, not because of the content of the more than 1,200 speakers who are divided into a few dozen simultaneous stages with their ideas and presentations, because, with rare exceptions, border content is definitely not the strong point of this event.

I don't say that either because the event has been going on since 2016 in Lisbon. In addition to the strong cultural ties that the city and the country have with Brazilians, the Portuguese capital has become one of the most cosmopolitan and dynamic cities in the modern world.

I say this because that is where we can see the largest set of companies and startups that are building this new world. Every year I play the role of startup hunter looking for the most interesting artificial intelligence applications in the world. In this article I will talk about my top 5 of 2019.

But before that I could not fail to mention some lectures that marked my passage this year.

GDPR, LGPD AND CITIZENS AGAINST ATTACK

Privacy was one of the main topics discussed at the event. The Web Summit had Edward Snowden in one of his opening lectures. For those who don't remember, he was a former CIA systems administrator and a former US security agency contractor. He made public details of several programs that make up the United States' global surveillance system, obtaining personal data from many citizens around the world.

Snowden started the event by warning how the unscrupulous use of personal data can be used to manipulate and harm people and reputations. Thus, access to personal data is not a harmless activity, quite the contrary.

On the last day of the event, the topic of privacy was once again highlighted with Margrethe Vestager, a Danish policy, which is currently European commissioner for competition, and has been applying harsh and high penalties to companies that are not entering the line, when the subject is information and personal data not consented. Her message was clear: it is important to have a lot of responsibility when using personal data. 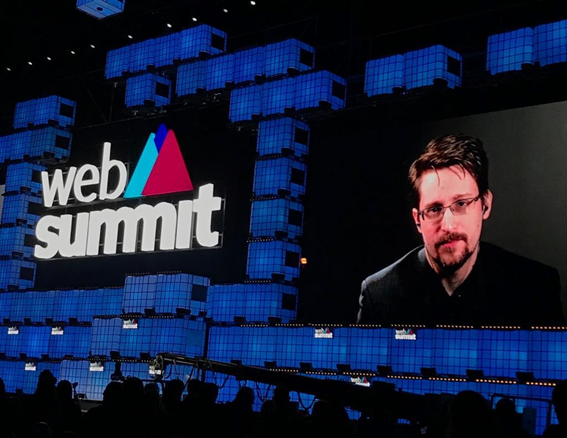 It was possible to run into several robots during the fair. I talked to two of them and was served by a third.

Once again Hanson Robotics and SingularityNet were present showing two of their most iconic robots. Sophia and Philip Dick had an interesting debate that makes us very curious about the architecture used and how much of the conversation follows a spontaneous flow, how much still needs to be programmed and directed.

But the show aside was the masterful entry of Spot, from Boston Dynamics. It is one thing to watch the various Boston Dynamics videos on YouTube, in which several of his creations do fantastic things, another is to see Spot live doing everything he does best, climbing stairs, crossing obstacles and dancing.

The technology closely impresses like the best science fiction films. 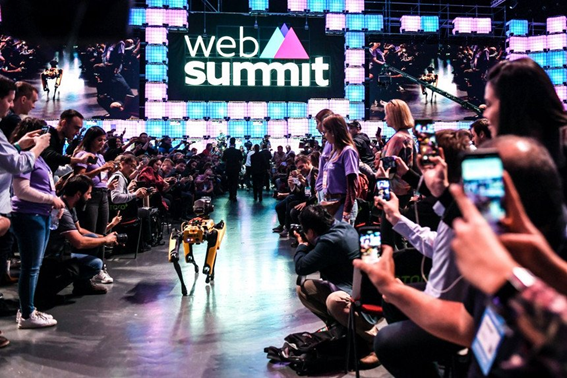 BLOCKCHAIN ​​AND THE COLLABORATIVE AND SHARED ECONOMY

Brave's browser and its token, BAT (Basic Attention Token), are a blockchain project that I've been following for some time. It was a pleasant surprise to see Brendan Eich, CEO of Brave, present the latest news on the project.

Brave, which has its Portuguese version, is a browser that blocks all unwanted advertisements in your internet browser and, more than that, allows you to choose, if you want, to receive relevant advertising for you.

For your attention, which is monitored non-invasively by your device's camera (eye tracking), the browser distributes cryptocurrencies (BATs), which can be converted into cash or benefits for your favorite brand.

The proposal is to charge advertisers a fee to publish consent advertising to a number of users with potential interest. Part of this amount is passed on to the content producers where the advertising is presented. Another portion is converted into benefits for the user. Very cool idea that even works for mobile devices. 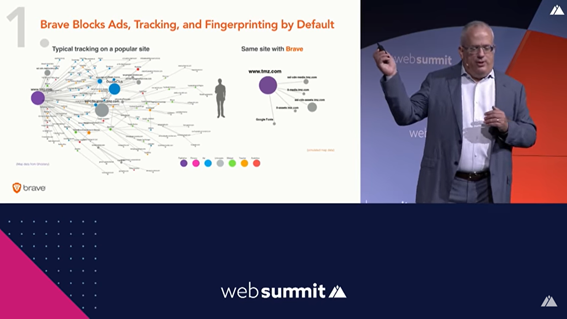 Catwalk helps you to go in fashion through a virtual assistant that helps customers validate their choices at the time of inspiration and purchase.

You must use a hybrid architecture with chatbot, machine learning and computer vision. www.mycatwalk.com.br

Zaaam is a German startup that helps companies with the question and answer processes of major tenders.

It facilitates the bidding process for complex projects by analyzing the latest offers and Request for Proposal (RfP) documents.

It seems to me that they are still in the testing phase, but the technological solution promises to be of great help to large B2B companies worldwide. www.tenderservice.zaaam.online/

The British Healx has a very noble purpose: to research and discover treatments for rare diseases. They aim to improve more than 100 treatments by 2025.

They use unsupervised machine learning among other things to explore possibilities.

They focus on the discovery of new drugs and the knowledge gaps of experts to accelerate the process of this discovery.

It is worth knowing at www.healx.io that it has been in the market for a long time doing very well.

Are you a first rate musician or do you want to make some arrangements to try a new tune, but you can't always get the whole group together to play or rent a studio? If so, also British Vochlea was made for you.

It transforms your voice, the snap of your fingers, a clap of the palm or a clink of your fingers on a table into the note closest to your favorite instrument. It uses machine learning algorithms and speech recognition and yes. The ease of building new melodies is impressive. The solution is already pre-purchased. https://www.vochlea.co.uk/

Many people are concerned about the new General Data Protection Law (LGPD), which in its European version is called GDPR. What people don't tell you is that technology can do fantastic things, including solving anonymity problems without losing the wealth of personal data.

It was from a very cool idea of ​​digitally replacing people's faces with other anonymous faces, but with much of the same characteristics of the original person, such as eye color, hair, ethnicity, age, humor, features, which makes the German Brighter a company to keep an eye on. Privacy is maintained by design of the solution with an elegant use of computer vision and deep learning. https://brighter.ai/

Mishka is not one of the top 5 because it is not yet using artificial intelligence in its solution. But that is part of the plans of the Russian startup whose main product is an interactive teddy bear with a series of IoT sensors.

The sensors access some versions of stories stored in the cloud that, in their version powered by AI, will be able to interact with children bringing stories that require the repetition of words and concepts, the teaching of new languages ​​and the validation of learning effectiveness. It is worth monitoring, the idea is very good and charming. www.mishka.cloud