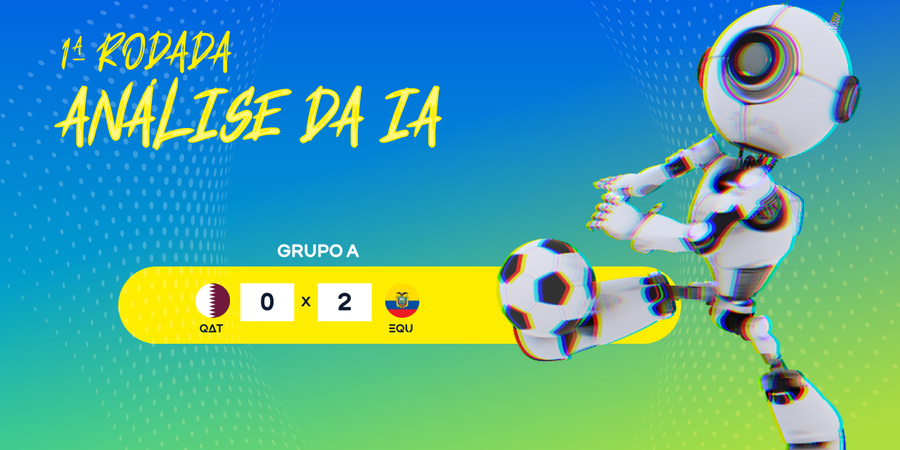 Every premiere is tense. There is a superstition that wishing something bad works to make everything work out. Like, for example, "break your leg" in the theater. The curtains are known in English as “legs” or “legs” so, “breaking a leg” means to go beyond the curtain and enter the scene, a wish of good luck. Ecuador beat Qatar yesterday by 2-0 in the first game of the 2022 World Cup. Of course, the debut nervousness was present, but the FIF-AI did not see champion football in both teams, despite some relevant characteristics of winning football.

By the algorithm, the match was 40% below the level of a champions match. Among them, Ecuador had 55% relative intensity against 45% for Qatar. Despite two goals, the most important fundamental of the game was little executed, which are the finals. Ecuador, with a 50% accuracy, while Qatar with a 0% direction accuracy rate. Ecuador's driving rate is good, but the amount of submissions is well below what it should be. Getting at least three times less shots on goal than he should have.

Valencia, striker from Ecuador, finished three times and scored three goals, one of which was disallowed. It is worth mentioning that in his participation in the game he had a low error rate, despite playing in a field where skill and decision time are under a lot of pressure.

With regard to other important fundamentals in defining matches, such as tackles and interceptions, Qatar had an interesting relevance, but failed to score goals. Four of his players were the ones who tackled the most. Bassam Hisham, midfielder, Homam Ahmed, winger, Boualem Khoukhi, midfielder and Karim Boudiaf, midfielder. The problem is certainly that, after recovering the ball, when launching, the hit rate was 24% and, when crossing, the rate was 22%, considerably reducing the chance of goals Ecuador was only 10% more effective in launches and crosses, but as he had an effective finishing rate, he took the game.

Emotion certainly has a great influence on the skills and decision-making power of shots under pressure on the field and, apparently, the Qatari team was shaken by the goal conceded, but small differences in the most relevant fundamentals, generated the difference in the game's score.